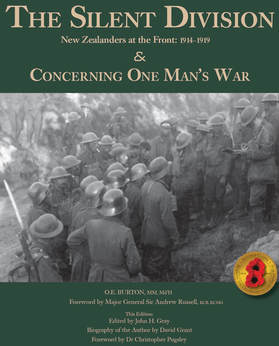 This Edition:
Edited:       by  Brigadier John H. Gray, CBE, ED
Biography: of the Author by David Grant
Foreword:  by Dr Christopher Pugsley
ORDER NOW
Synopsis:
​​  Ormond Burton had a lucky war. Three times on the Western Front - a graveyard for thousands of New Zealand soldiers - he was was hit by bullets or wounded with shrapnel. Each time he survived his injuries. In One Man's War, Burton recounts these events with modesty and gentle humour and creates a vivid sense of the conflict. At the Somme, where Burton felt "New Zealand very definitely became a nation", he described how troops in a trench came under attack from a German howitzer, just as a group of officers were sipping welcome mugs of tea.
"A shell landed outside," he wrote. "After the right psychological pause, another fell screaming down. It was plummeting right into the middle of the tea drinkers. Mugs were flung away and the owners dived frantically for any scrap of cover within sight. All except Major Stephen Allen, who stood quite still, placing one hand carefully over his mug. The shell screamed down, drove deeply into the mud, and exploded. When the deluge of mud and bits and pieces had fallen, the Major quietly removed the covering hand, and went on drinking."
In early 1917, at Estaires in northern France, Burton earned the first of his war honours after he collected his badly wounded friend, Jock Mackenzie, from No-Man's-Land during a raid on enemy trenches. The Scots-born lieutenant was cut down by heavy fire coming from the German side. Burton reached him, "tensed up for the inevitable bullet", when unexpectedly the Germans clambered out of their trench with their hands in the air.
The action allowed Burton's stretcher teams to gather their wounded, apart from those closest to the German wire, who were taken in by the enemy. When all the wounded were collected, the Germans got back in position "and the war went on".
Burton wrote: "This was the finest and most chivalrous thing that I saw during the whole war. Those Germans had endured a shattering barrage. Their trench was a broken shambles, with the dead and wounded lying thickly at their very feet.
"We were just infantrymen in No-Man's-Land, and protected by no rule or custom of war. And yet they spared us, and allowed us to bring in men we could never have ventured near until twelve hours later when night fell."
In vain, Burton tried to find the German officer who instructed his men to creasefire. But the episode saw Burton change course, and leave the ambulance corps for combat with the Auckland Regiment. For his bravery, Burton was awarded the Military Medal.
Six months later, as the New Zealand Division battled in the mud at Passchendaele, Burton was shot in the chest from "point-blank range".
Looking down at his ripped tunic he noticed a "small, round hole more or less over the heart. This had all the appearance of the typical entrance wound of a rifle bullet. As there was no exit wound. the bullet was presumably in the chest somewhere."
Burton was evacuated for treatment but doctors could find only a metal splinter beneath his skin. He had undoubtedly been shot: two photographs he carried of his sister were punctured where the bullet hit, and a Bible tucked in his jacket was damaged.
The indestructible Burton soon returned to the front, and once more into harm's way. In March 1918, near a little French village called Mailly-Maillet, with barely a road separating the New Zealanders from German troops, Burton was hit by mortar fire.
The impact reminded him of "one of Peter Drummond's best efforts" - a reference it seems to being caned by a teacher at Auckland Grammar. "I felt a warm trickle down the leg. We investigated and found three wounds - one fairly deep where the shrapnel had fortunately missed the hip-joint but had gone well into the flesh."
Burton limped back to an ambulance station, where he ran into Vic Ramsey, an old friend from his Training College days in Auckland. They chatted before Ramsey went outside and was instantly killed by a shell-burst. Records Burton: "I was probably the last person he spoke to."
Burton rejoined his regiment as the war turned against Germany. Leading a raid near the village of Grevillers under fierce machine-gun attack, Burton was shot as he dragged ammunition across the battlefield. Luckily the bullet struck his left arm as it protected his chest and was deflected by a bone.
His actions that day, in August 1918, earned him a Medal of Honour from the French for capturing six machine-gun posts and securing the village.
It was the last he saw of action. Fixed up, he was promoted and had to leave for officer training, but not before a walk through the front line.