Synopsis:
​​This is the story of Alfred (Bunty) Preece of the Chatham Islands, soldier, farmer, local body politician, kaumatua and tireless advocate for his people. His recollections of the Italian Campaign of World War Two and the effect of those two and a half years were but the beginning of a lifetime of dedication to the welfare of others. 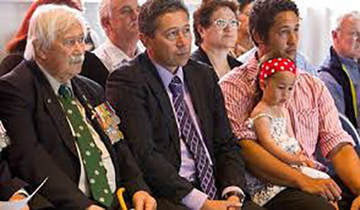 Honouring the Maori Battalion
Tears and cheers marked a ceremony at the Papanui RSA rooms yesterday.
The tears were for departed soldiers of the New Zealand Army's 28 (Maori) Battalion, as two of the last survivors met as the battalion's
colours were "marched in". It was the last time the ceremonial marching in, performed by regular army squad.
The cheers were for the launch of two new books - a reprint of the 1956 Official History of 28(Maori) Battalion, and a biography of a battalion member Bunty Preece. The Chatham Islander served with the battalion throughout the Italian Campaign in World War II.
​The battalion of infantry distinguished itself in the war, impressing Allied and enemy commands alike with its fearless fighting..
​It was thrown into some of the toughest battles and achieved some of the greatest victories but suffered heavy losses.
Preece attended the ceremony yesterday with fellow battalion veteran  and long time friend Henry Norton and about 50 supporters
John Douglas Publishing director Bob Anderson said that it was appropriate the books should be released this week, as both were an attempt to keep alive the history and traditions of 28 (Maori ) Battalion.