Synopsis:
The book tells the story of the Gallipoli campaign through the eyes of the gallant New Zealanders. There is an introduction followed by numerous chapters telling chronologically the battles and different aspects of the campaign from 25 April 1915 through to 20 December. The book inclueds  • The Battle of the Landing • Dead Man’s Ridge • Disaster at the Daisy Patch • Holding the heights • Defending the tops at Courtney’s and Quinn’s Posts • The August Offensive • The battle for Chunuk Bair • The Turkish counter-attack • The needless carnage on Hill 60 • The deadlock in the trenches • Our Nurses go to War – each is backed up with photographs and biographical details of gallantry award winners. There’s a bio on each of the 360 recipients including full citations, recommendations, newspaper quotes, and letter and diary quotes. 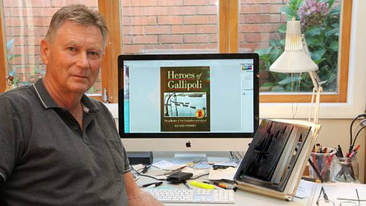 War Heroes book salutes NZ Bravery
​A Hamilton man has dedicated two years to the recognition of New Zealand war heroes in Gallipoli. Historian Richard Stowers has put together a tribute to the bravery of New Zealand men and women in his book Heroes of Gallipoli. Stowers said New Zealand's efforts were not recognised as they should have been.  "There is a disparity in decorations between the Australians and New Zealanders, and the British " not just the Australians," Stowers said. Nine Victoria Crosses, the highest military award for valour, were awarded to Australians with only one awarded to a New Zealander. This was unfair, says Stowers. New Zealand had exactly the same type of people go to the war as Australia and Britain. He said the reason only one Victoria Cross was awarded to a New Zealander was Sir Alexander Godley, who was in charge of approving military awards after men and women were recommended for them. Godley was of the opinion that exemplary efforts should be expected and not rewarded and typically downgraded recommendations for Victoria Crosses to lesser decorations. To highlight this, Stowers noted when a soldier's recommendation for a Victoria Cross was downgraded or dismissed - a task made no easier by the fact that about half of the letters for recommendations were no longer in existence. Stowers said because of this the courage of the 14,000 New Zealand men and women at Gallipoli has been misrepresented. "It's sad because I think the Aussies sort of rub it in a bit." He spent the last two years sifting through service files, national archives, and museums, as well as contacting families. He read letters, diaries and old newspapers and then turned his findings into one coherent narrative. Stowers said during the process of studying the men and women's lives he began to feel as if they were family. He said in the beginning all he had was a name, then he would find a letter that might be written from a friend and he would realise they were real people. "You start to wonder, are they somewhere looking down on you saying 'good on you mate, you're doing us a favour'." The bulk of the book retells the history from Gallipoli, the landings and the battles in chronological order with the stories of his war heroes given mention at the time they occurred. Stowers said it was a difficult task picking a moment of exemplary bravery to highlight when he knew the soldier had shown bravery so many times. He said he had to make judgement calls on a case by case basis, trying to give mention to as many of the heroes as he could. "I feel proud of what I've done, one of the reasons why I write the stuff is to record the history so it's not forgotten." The book will be launched at the Dominion Museum in Wellington on October 21, with the Minister of Veteran Affairs and a representative from the Turkish and British consulates in attendance. Stowers will host a smaller event in his Hamilton home to say thank you to those who helped him in the book's production.