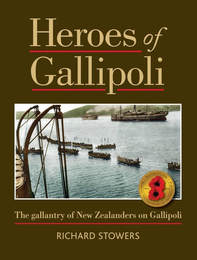 The book tells the story of the Gallipoli campaign through the eyes of the gallant New Zealanders. There is an introduction followed by numerous chapters telling chronologically the battles and different aspects of the campaign from 25 April 1915 through to 20 December. The book inclueds • The Battle of the Landing • Dead Man’s Ridge • Disaster at the Daisy Patch • Holding the heights • Defending the tops at Courtney’s and Quinn’s Posts • The August Offensive • The battle for Chunuk Bair • The Turkish counter-attack • The needless carnage on Hill 60 • The deadlock in the trenches • Our Nurses go to War – each is backed up with photographs and biographical details of gallantry award winners. There’s a bio on each of the 360 recipients including full citations, recommendations, newspaper quotes, and letter and diary quotes.