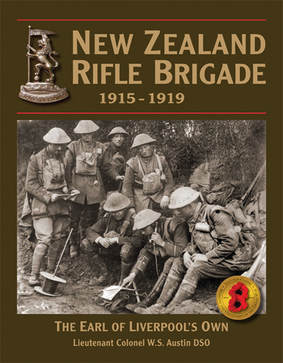 This is the story of a Brigade which served as part of the New Zealand Expeditionary Force in the Great War. It is a regimental history, the official records, from which for the most part

it has been compiled. Mention is made from time to time of bold leading and collective

and individual acts of daring. Instances of this kind, it must be borne in mind, are such as has been placed on definite record in the field from the accounts of witnesses, these last being for the most part officers and no- commissioned officers commanding larger or smaller bodies of men. A little reflection will show how probable it is that these observers have themselves been worthy of special honour, but that such notice has been impossible because their own actions had not been similarly witnessed. In this connection,

too, one could wish to speak definitely of the many who, unmarked, perished in the very act of heroism; but the individual is lost in the great host who sealed their devotion

with their lives, and whose sacrifice has earned for them an enduring place in the hearts of all New Zealanders. The publisher has taken every endeavour to retained the

original text, but has taken the liberty of placing all of the maps on to a DVD which can be retrieved from the back of the book. He has also enhanced the title by adding a comprehensive Index.