Synopsis:
The New Zealand Government ordered the deployment of combat forces to Vietnam in 1965 to join Australia and other Allies engaged in that War. Victor 2 Rifle Company arrived in Vietnam on 12 November 1967 and left on 13 May 1968. Major Brian Worsnop was the commander, and the author, Lieutenant Tony Howell, was one of the Platoon Commanders. Jungle Green Shadows is a very important historical record of Victor 2 Company’s participation in New Zealand’s most unpopular war. What is fascinating is how Tony has managed to weave the thoughts and experiences of so many surviving Company soldiers into this factual account. As a result it reads more like an educational novel than a history book. There is one chapter that deals with a typical day in the life of a Lead Scout, a tense and thought-provoking look at how these young men cared for themselves and each other. The reader may find the Scout’s contact with two Viet Cong too graphically described - but it is indicative of what these young men were asked to do. The Company was deployed to Vietnam during the most violent period of the Vietnam War – the Tet Offensive. If you had any questions about how this Rifle Company became a legend, this book will provide the answers. The defining hours for Victor 2 Company were when they were attacked and surrounded by a Battalion of Viet Cong on 7 February 1968. For several hours the Company fought off the attackers, initially without artillery or air support. The book is not all combat action, however, although there is enough of that there. Tony deals thoroughly with the battlefield stress and post traumatic stress disorder (PTSD) issues that arose from being constantly in the front line. He is very sympathetic in the way he covers these stress issues and their effects on families and, in turn, their children. Tony brings to light the brutality of the Hanoi regime and the huge toll they inflicted on their own people, both during the War and after the Allies withdrew from Vietnam in 1972. It is not pleasant reading of assassination squads and ‘re-education camps’ but that was the reality behind the bamboo curtain. He even follows the re-education fate of three key Phuoc Tuy Province officials who were in office during the time Victor 2 Company was in Vietnam. The real value of this book is that, while it may have been written for the families of the Victor 2 Company soldiers, the author’s easy flowing style will appeal to all New Zealanders. This book is well-researched and the sources are all identified. Jungle Green Shadows is a must for Vietnam Veterans, families, schools, stress counsellors, amateur or professional military historians and researchers on the Vietnam War. 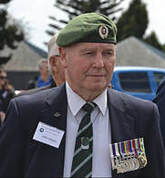 ​   Military Cross (MC)
Anthony Gordon Howell, 39042.
Lieutenant. RNZIR, Victor 2  Company
Citation: NZ Gazette Number 65 dated 17 October 1968
​ Lieutenant Howell graduated into the New Zealand Army from the Officer Cadet School, Portsea on the 13th June, 1964 and was posted to the Royal New Zealand Infantry Regiment. He served with the 1st Battalion of that Regiment in Malaysia and Borneo from February 1965 to November 1967, and arrived in South Vietnam on 12th November 1967 as platoon commander of 4 Platoon, VictorTwo Company.
During Operation Duntroon on the 13th January 1968, 4 Platoon was given the task of ambushing a track which was being used by the Viet Cong. Lieutenant Howell so carefully sited this ambush, that, when an enemy platoon moved along the track at 2030 hours, the whole of the enemy lead elements were caught in the ambush. As soon as the ambush had been sprung, Lieutenant Howell led his reserve section forward to deal with the remaining enemy, but his party was pinned down by enemy. Lieutenant Howell crawled forward by himself until coming within range of two enemy soldiers, he was able to kill them both with grenades. Eight enemy were killed in this contact and ten weapons captured.
On the 7th February 1968, during Operation Coburg in Bien Hoa Province, Victor Two Company was attacked by a large enemy force. Lieutenant Howell’s platoon was occupying a perimeter defensive position which was attacked by the enemy. At 0630 hours, Lieutenant Howell received a report that his forward section could hear a large number of enemy approaching their position. He moved forward and waited until he was sure his defensive fire would be most effective.The ensuing enemy assault, which lasted for one hour, was mainly directed against 4 Platoon and Lieutenant Howell, with complete disregard for his own safety, moved about his platoon coolly and efficiently directing the fire of his men. The enemy were forced to withdraw leaving seven dead on the platoon perimeter and the signs of many more casualties.
During these operations, 4 Platoon was responsible for killing nineteen enemy without suffering a single casualty. Much of the success which the platoon achieved is due to the personal efforts of Lieutenant Howell. His skill, coolness and outstanding courage under fire have shown a high degree of leadership which brings credit to himself, his company and the ANZAC Battalion.

​  Lieutenant General
The Rt Hon Sir Jerry Mateparae, GNZM, QSO
FOREWORD
In 2013 I made a State Visit to Vietnam. On the final leg of my visit I met with the Chairman of the Ho Chi Minh City People’s Committee, Mr Le Huang Quan. Le Huang Quan had been a 14-year old boy soldier in the National Liberation Front Army in Phuoc Tuy Province. He spoke of his experiences during what he called the “American War”. Seemingly, he harboured no grudges, indeed he had a high regard for the professionalism of the ANZAC soldiers that he had fought against.
The Vietnam War was highly unpopular in New Zealand. It had a divisive, at times acrimonious impact on our nation. It was not until 2008 that the men and women who had served in Vietnam received official recognition for their service and they were formally welcomed home!
New Zealand’s involvement in the Vietnam War spanned eight long years. Nearly 4000 New Zealanders served in the War; 37 of them made the ultimate sacrifice  and nearly 200 others were wounded. Since the War, others who served there have died prematurely, and many Vietnam veterans and their families continue to suffer the after- effects of that service.
All of those New Zealanders who served in the War did so as a volunteer. They did their duty to the best of their abilities and served alongside Australian troops in the best of ANZAC traditions. Their legacy, told in their words in the book, is one of professionalism, courage, commitment, comradeship and integrity. They helped to forge the war fighting skills of the next generation of our soldiers.
On a personal note, I know many of those mentioned in this book. From the time I was a young soldier in the Army during the years immediately following the end of the Vietnam War until my appointment as the Chief of Defence Force every senior commander I had was a Vietnam veteran. Some like the author had a more direct influence on me and my career.
Jungle Green Shadows is, as Tony Howell says, the story of Victor 2 Company’s time in Vietnam. It is the account of the men of Victor 2, in their words and images. The book also provides insights from their families. It is both an historical record and an anecdotal account, written in a way to inform the families and friends of the men and others with an interest in understanding the men’s experience.
For those who have served in the Armed Forces, there will be an air of familiarity.
​  The routines established during predeployment training which get carried over into the deployment and the first mission - anticipation, elation, boredom and humour, the apprehension, tension and sorrow; and a concern for one’s mates that transcends time. And then the return home and the consequentials that in some cases have a profound effect on soldiers and their families.