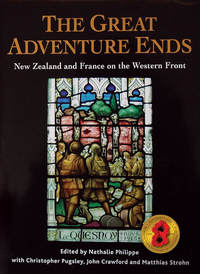 The First World War ended for the New Zealand Division some kilometres east of the old walled fortress town of Le Quesnoy in Northern France on 11 November 1918. The War had a cataclysmic impact on New Zealand which echoes to this day. It had an even greater impact on France and especially Northern France which endured much of its countryside and towns being in turn occupied by the German Imperial Armies and then devastated in the battles to force their withdrawal. The human cost was of a similar scale.

Sold out
Add to Cart