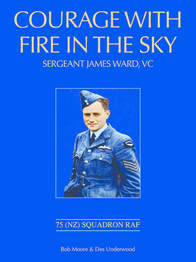 Courage with Fire in the Sky

​​Born at home 14th June 1919, fourth child to Percy and Ada Ward of Whanganui, James (Jimmy), small of stature, imbued with duty and service by his upbringing, fought all his life to do things the big boys did, through team work and share adventures. A remarkable recovery from near death caused by pneumonia, to acceptance by the Royal New Zealand Air Force as a pilot for Active Service was a dream accomplished. On the night of 7 July 1941, Sergeant Ward was second pilot of a Wellington bomber returning from an attack on Munster. When flying over Zuider Zee at 3962.4m, the aircraft was attacked from beneath by a Messerschmitt which secured hits with cannon shell and incendiary bullets. Fire then broke out near the starboard engine and threatened to spread to the entire wing. The crew forced a hole in the fuselage and made strenuous efforts to extinguish the fire. As a last resort, Sergeant Ward volunteered to make an attempt to smother the fire with an engine cover. With the help of the navigator, he climbed through the hatch on to the wing, despite the slipstream from the airscrew, which nearly blew him off. He lay in a precarious position and successfully smothered the fire. Tired as he was he was able to successfully make the perilous journey back into the aircraft. The flight home had been made possible by the gallant action of Sergeant Ward in extinguishing the fire on the wing, in circumstances of the greatest difficulty and the risk of his life. For his action Sergeant Ward was awarded the Victoria Cross on 5 August 1941.