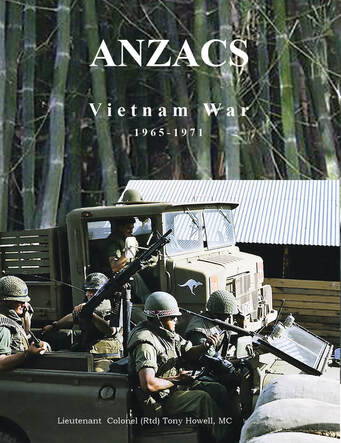 Author:
Lieutenant Colonel (Rtd) Tony Howell MC, RNZIR/NZSAS
ORDER NOW
Synopsis:
This book is a commentary on the ANZAC forces involvement in the second Indo-China (Vietnam) War during the period 1965 to 1971. Their actual involvement as ANZACs in Vietnam, started in 1965 with the deployment of 1 RAR (Australia) and 161 Battery (New Zealand) to Vietnam in support of the 173rd Airborne Brigade based in Bien Hoa. It wasn’t until the 1st March 1968 that the first ANZAC Battalion was created in Nui Dat, comprising 2 RAR, Victor 2 Company and Whiskey 3 Company. From that point on, the ANZAC Battalions were based in sequence on: 4 RAR, 6 RAR, 2 RAR and 4 RAR.
The merging of Australian and New Zealand soldiers was as seamless as it was in Egypt in 1914. In that year, the ‘Australian and New Zealand Army Corps’ was created when the Australian Imperial Force and the New Zealand Expeditionary Force were placed under command of Lieutenant General William Birdwood in Egypt. The two nations landed on Gallipoli on the 25th April 1915 as ANZACs. Their achievements at Chunuk Bair and Lone Pine Ridge are now legendary, cemented in our mutually proud ANZAC history.
ANZACS  in Vietnam is a history recognising the contribution of our ANZAC forces during the Vietnam War, particularly the part the New Zealand Rifle Companies played. The proud reputation of the original ANZACs was upheld during this most unpopular and brutal war. The fact that much of the fighting was in the jungle fastness says a great deal for our soldiers' courage and professionalism. Their stoicism when facing the constant threat of M16 mines is beyond belief. Their courage in the face-to-face encounters with the finest VC and NVA units in the Province is not in doubt. In the First Australian Task Force it was difficult to identify Australian from New Zealand and Regular force from National service soldiers. These soldiers answered their Governments' call and did their nations proud.
The book is written in the same style as Tony’s first book, Jungle Green Shadows published by John Douglas Publishing in 2019. It is easy to understand with clear explanations of military terms. There are maps and explanations to help the reader make sense of the many battles fought in Phuoc Tuy Province and the northern border areas. Best of all, there are hundreds of photos that reflect the camaraderie and one-ness of these gallant young men. The book is not a glorification of war nor does it seek to make a political statement about ‘that War’. It simply tells the story of our ANZAC soldiers in Vietnam: 1965 to 1971.
​
Published: TBA
Price: $80.00
Size: 200mm x 260mm
Extent: 256Pages
Illustrations:  200 coloured & B/W (approx).
Binding: Cased & Dust Jacketed
ISBN: 978-0-9951219-2-8
​